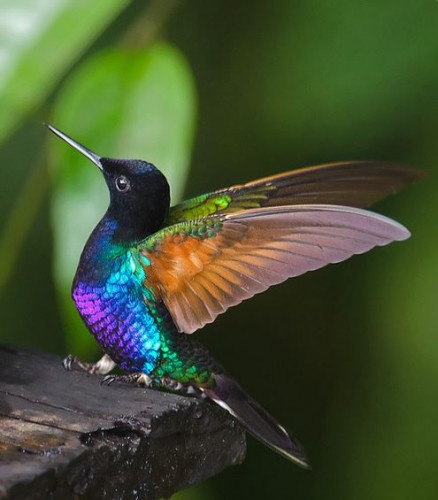 This breathtaking species of hummingbird is the Velvet Purple Coronet (Boissonneaua jardini) which can be found flitting through the humid forests of Colombia and north-western Ecuador. Both males and females have highly iridescent feathers which make them highly sought after for the avid birdwatcher (and novice alike, as in yours truly!).

In dim or poor lighting, however, the bird appears almost completely black as there is no light to bounce off of its feathers, which are capable of shimmering purple, blue, green, and pink across the bird’s small body. The white feathers on the underside of its tail feathers would be the only hint that something would be flying through the darkness. Though, once the sun starts shining, it’s almost impossible to miss this jewel-toned beauty!

What a Wedding Night For These Guys: Scarlet-Bodied Wasp Moth

Video: Screech Owl Being a Chatterbox