Sea Tadpoles: a New Twist on the Classic Childhood Creature

Habitat: benthopelagic habitats in the Atlantic and Pacific Oceans
Status: Not Listed

Quick – what’s the first thing that comes to mind when you see this strange fish? If you said “gee, I think it looks sorta like a tadpole” well, then, you have the same train of thought as the scientists who named this creature because it’s called the Sea Tadpole (Careproctus reinhardti).

These fish are found at a maximum depth of 1750 m and have eel-like bodies with a bushy beard. It trails along the bottom of the ocean looking for decaying foodstuffs.  I’m guessing those hairs help it feel its way around in the complete darkness and alert it if it happens upon something tasty. Though, that’s just a guess. There’s literally no information on this peculiar fish except for how deep down it lives.

I do know why it’s red, though. A lot of deep sea creatures are colored black (for obvious reasons) but there are also those that are red, like this Sea Tadpole. The reason is, red wavelengths barely (if at all) penetrate that far down into the water column. So, red effectively functions the same as black in that creatures with this coloration are camouflaged in the darkness.

Very cool creature. Still not sure it beats out the regular tadpole in my heart because of the nostalgia factor and all, though! 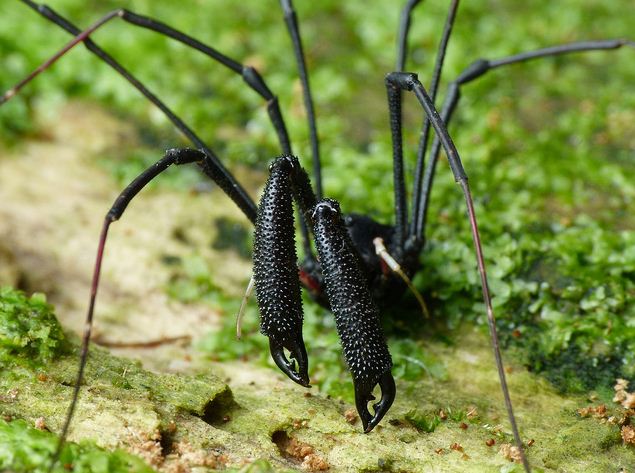 This Lobster-clawed Long-Legged Harvestman Will Scare the Living Daylights Out of You!