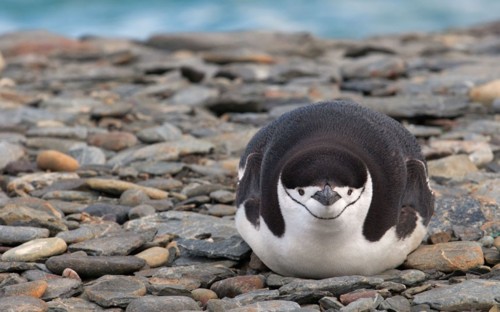 The Chinstrap Penguin (Pygoscelis antarctica) is one of the most easily recognizable species of penguin due to its unmistakable “facial hair.” A thin black band runs underneath its head that gives it the appearance of wearing a tiny black helmet (in addition to looking like a super trendy hipster). So naturally I’m obsessed with them.

While they may appear cute and cuddly, these penguins are considered the most aggressive species of penguin out there. That might be because they have to defend their chicks as well as themselves against leopard seals (their main predator). I think you’d be a little aggressive, too, if you had to watch out for jaws like these all the time:

The 16 million chinstrap penguins in the world live on barren islands and, during the winter, will head out onto large icebergs. These make for easy launching pads for the penguins, who swim up to 80 km (50 mi) offshore each day in search of food. Their diet consists of krill, shrimp, and fish which they chow down on to reach an average weight of 13.2 lbs.

They require snow-free ground when it’s mating season, however, because they build their circular nests out of collected rocks. Once the nest is constructed, the female lays two eggs which will be incubated by both the male and female for shifts of 6 days at a time. After about 37 days, the chicks hatch, covered in fluffy grey, downy feathers. They’ll stay in the nest for 20-30 days before they leave to join the colony.

In 2004, two male Chinstrap Penguins at the Central Park Zoo, in New York City made headlines when they attempted to raise an egg together. The penguins, named Roy and Silo, formed a pair-bond and tried to “hatch” a rock. Keepers stepped in and gave them a fertile egg, which they ended up successfully hatching and raising. This event called into question the possibility of gay relationships in the animal world. Personally, I think it’s unfair to deprive “gay” male penguins of raising these adorable chicks, if they make viable parents. I don’t blame them for wanting to raise one of these cuties:

dey are so wittle and fwuffyyyyyy!! It’s kind of awesome to know they’ll grow up to have really fashionable “beards,” too. From cute –> to cool!

Here’s a quick little documentary clip about these hip birds: