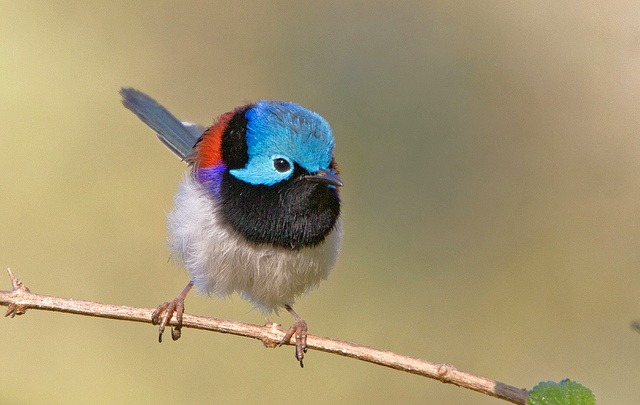 Habitat: found across most of Australia
Status: Least Concern

These tiny yet brilliant birds are called Variegated Fairywrens (Malurus lamberti). They are distributed across 90% of Australia but can be found in a wide variety of habitats including scrubland with ample vegetation, rocky outcrops, and have even been reported to use deserted (well, hopefully) mammal burrows to avoid extreme heat. I guess when you’re such a little bird, it’s easy to be happy in so many spaces – it’s not like you need the space! Variegated Fairywrens only reach 14–15 cm (5.5–6 in) in length and weighs 6–11 g (0.21–0.38 oz). As you can tell from the photo below, when compared to a human hand their small stature really stands out:

Not unlike other Fairywren species, Variegated Fairywrens is a cooperative breeding species which means that there’s one socially monogamous pair with several “helper birds” in the group that assist in raising the couple’s young. These helper birds are usually progeny of the alpha couple that stick around to help raise the young and defend the group’s territory. It’s basically like having a throng of built in nanny bodyguards for your babies!

These birds are noted for their sexual dimorphism, with the males being much more colorful than the females. All the photos above are males while the photo below shows a female on the left and a male on the right:

As you can see, there’s quite a difference between the dazzling blue-capped male and the dull mousey-brown female. But, in his eyes she’s a stunner! Males actually bring yellow petals to the female during courtship in an attempt to woo her. I just thought that was so cute when I read it. It’s like when guys bring girls bouquets before a first date except in this case the guy is too small to hold a bouquet! … so he goes with a single petal. Aaaaawwwww!

A Duck With Style: Barrow’s Goldeneye