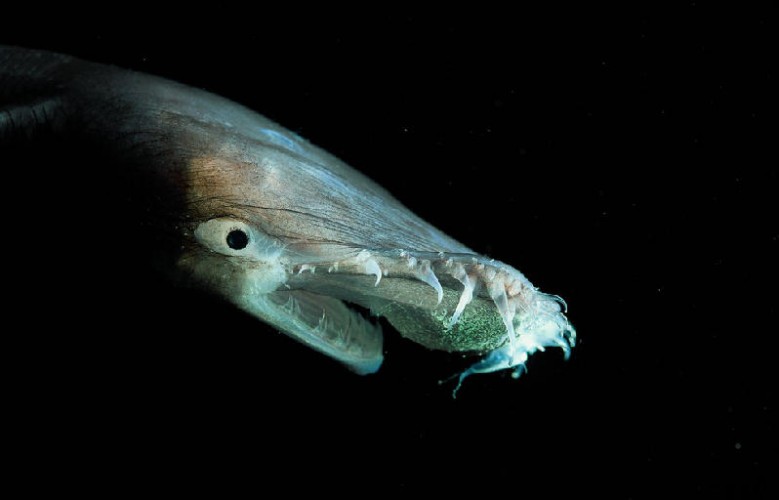 Habitat: deep sea; specimen has been collected in the Tropical Eastern Pacific
Status: Not Evaluated

This bizarre species of fish is known as Prince Axel’s Wonder Fish (Thaumatichthys axeli). They are found at extreme depths, with specimens being recorded at over 11,700 feet deep (in the abyssal zone)! Because of this, very little is known about the species. The only specimens caught were around19 inches in length, though no one really knows just how big these fish can get.

Like other species of anglerfish, Prince Axel’s Wonder Fish has a special distinctive forked light organ inside their mouth, which they use to lure prey. They also possess large, curved teeth that “fringe the upper jaw like a comb”.

The fish was first discovered during the Galathea expedition of 1950-1952. Anton Bruun described it as “unquestionably the strangest catch of the Galathea Expedition, and altogether one of the oddest creatures in the teeming variety of the fish world.”
The fish was given its name as a tribute to Prince Axel of Denmark. Because really, what better way to honor a prince than to name a freaky looking fish after him? I know I would be more than pleased. “Here ye, here ye! Cupcakes for all!”