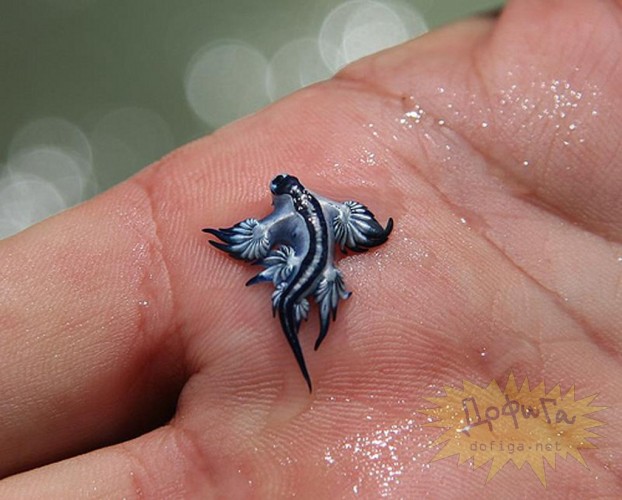 image credit: redbubble.com
Habitat: around the world in temperate and tropical waters

I’ve decided to start a tradition that every Monday I will post a new species of nudibranch. I absolutely love them, as does our reader Monica! What is a nudibranch you ask? Well, a nudibranch is a marine snail that lost its shell back in its early evolutionary history. There are more than 3,000 known species. They are known for their elaborate patterns and beautifully wild colors.

This particular one I’ve chosen to feature is commonly known as a Blue Dragon nudibranch. It spends its life floating on the surface of the ocean, much like the Violet Sea Snail. They feed on the poisonous Man of War Jellyfish, collecting the animal’s toxins and storing them in little sacs on the end of their feather-like “fingers.” The Blue Dragon can produce a much more powerful and deadly sting than the Man of War due to its ability to store the poison.

So what do you think? Do you like the idea of having a “New Week Nudibranch” posted every Monday?

edit: reader Gabriele has pointed out another common name for this nudibranch – the Sea Swallow!

Be sure to check out the Home page for more crazy creatures!