Respect the Stargazer… Or Else. 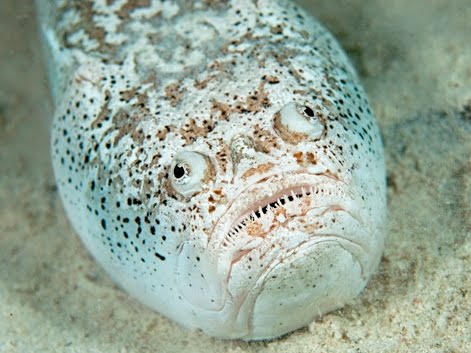 image credit: Keri Wilk/Barcroft Media, guardian.co.uk
Habitat: worldwide in shallow waters
Status: Not listed
Now here’s a really weird creature for ya. It resembles something out of an alien movie, possibly mixed with Mayan sculpture attributes? I could see people revering these things since, I mean, it’s so weird I wouldn’t want to do anything that would upset it ya know? It’s called a Stargazer and here’s some good news: they’re found everywhere!!With over 50 species inhabiting shallow waters around the globe, you could definitely encounter this creature if you’re ever diving in the ocean, though you might not even notice it. Stargazers bury themselves in the sand so that only their eyes and mouth are exposed (their eyes always look to the sky, hence their name).

When a fish swims overhead THEY better have revered that ugly fish or it won’t be looking good for them. The Stargazers leap upward and snatch up the prey before you can say “WHAT THE – “. Some even have lures on their heads to draw the fish closer.

Oh and if that isn’t enough, every Stargazer is venomous with two poison spines hidden above the pectoral fins and near the gills. Electric shocks are also in this fish’s arsenal.

How Big Do You Like Your Man to Be?