For the first time in 35 years, a new mammal species has been recorded living in the Western Hemisphere. This adorable creature is called the Olinguito, a relative of a raccoon that’s got a teddy bear-like face and a body about the size of a house cat. So basically it’s a bear-cat, which I’m totally digging. The rust-colored, fluffy mammal lives in the treetops of the Andes Mountains and weighs two pounds, making it the most petite member of the raccoon family.

Oddly enough the Olinguito was living right under scientists’ noses this whole time. A specimen named Ringerl was exhibited in the Smithsonian-run National Zoo in the Washington for a year in a case of mistaken identity. Keepers believed it was an Olingo, a close relative of the smaller olinguito. In an effort to try and get Ringerl to breed with other Olingos, they shipped the creature from zoo to zoo from 1967 to 1976: Louisville, Ky., Tucson, Ariz., Salt Lake City, Washington and New York City. When breeding didn’t pan out, they simply thought they had a fussy olingo on their hands.

“It turns out she wasn’t fussy,” Kristofer Helgen, the Smithsonian’s curator of mammals,  said. “She wasn’t the right species.”

The study has since been described in the journal ZooKey. Helgen had the idea that Ringerl (and similar specimens) weren’t actually olingos when he started looking over museum pelts and skeletons. In 2006 he led a team to South America in search of a live olinguito – and found one the very first night! Helgen figures there are thousands of olinguitos in the mountainous forest, traveling through the trees at night so they are hard to see.

It’s incredibly rare to find a mammalian species not yet known to science – so this is a major achievement! Good on you Kristofer Helgen and colleagues for unraveling this decades-old mammal mystery. 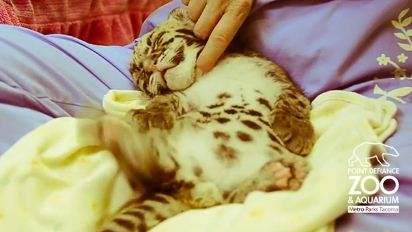 Siku, the Danish Polar Bear Cub That Will Melt Your Heart