A few days ago I came across a really great article about a hippo that had been spotted helping animals cross the Mara river in Africa. It’s a really fascinating story and gives these large, often dangerous creatures a good name. From Metro.co.uk:

“Visitors to a safari camp close to where the film Out Of Africa was shot stood in awe as they witnessed the annual wildebeest migration. But as they watched thousands of animals cross the raging Mara river they were astonished to see a hippo come to the rescue of two drowning stragglers.

The strong current separated a wildebeest, or gnu, from her calf and she watched helplessly as it was swept away.

Good Samaritan: the hippo gets closer as he sees the wildebeest struggling.

‘To everyone’s amazement the hippo came to the gnu’s rescue and pushed it gently to the river bank,’ said Abdul Karim, the head guide at Sanctuary Olonana in the Masai Mara, Kenya.

The infant panted for a moment before getting up and running to its watching mother.

But the female hippo’s work did not finish there. Within ten minutes she spotted a little zebra crossing the same stretch of water and pushed it across, its tiny head struggling to keep above the torrent.

I’ve got gnu, babe: the young animal is guided to the bank by the hippopotamus

‘It was an unforgettable incident,’ said Mr Karim.

‘Maternal love can be so strong it can even surpass species boundaries,’ he added.

Huge concentrations of game move between Kenya and Tanzania’s Serengeti National Park every year in the constant search for fresh grazing.” 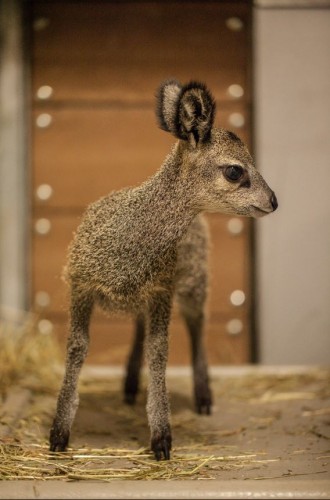