© Novita Estiti
Habitat: Central America, South America, and the Lesser Antilles. The beetle has also been observed as far north as Southern Mexico, in the states of Chiapas and Veracruz
Status: No Conservation Concerns
Okay everyone, deep breaths. There’s nothing to be afraid of. You’re looking at photos of a baby, if you will. A gigantic, pale, wriggling baby of a Hercules Beetle (Dynastes hercules); the most famous and largest of the rhinoceros beetles. The grubs of this enormous beetle grow up to 4.5 inches (110 mm) in length and weigh up to 120 grams. They spend 1-2 YEARS in this adorable form before transforming into a pupa, molting, and then emerging as an adult (shown below). These fat grubby babies can’t be all that bad. I mean, check out that girl in the last photo – could she look any happier??!

via: animal-wildlife.blogspot.com
The Hercules Beetle is one of the largest beetles known on the planet, being exceeded in length by only two other beetles Macrodontia cervicornis and  Titanus giganteus (posts on those ferocious beasties to come!)

© Bill Bailey’s World
It is considered the second strongest animal on earth, being able to carry 850 times its own body weight. That’s the human equivalent of lifting a 65-ton object. When it gets into fights with other beetles it will pick up its adversary with its horns, fly straight up into the air, and then slam the other guy down on the ground, breaking its head. Nice move. Like I said, nothing to be worried about with these guys. Nothing at all.

via: beetlespace.wz.cz
If I haven’t ruined your day enough, you can watch this video of Bear Grylls from Discovery’s Man vs. Wild eating a Hercules Beetle larva to survive. I’d rather die. Literally if it were life or death – death, PLEASE!
[Warning – this is absolutely disgusting!] 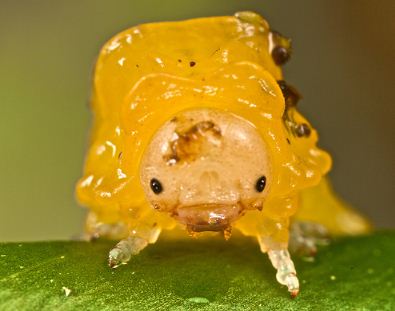