The Eagle So Massive, It Can Carry Off Children! 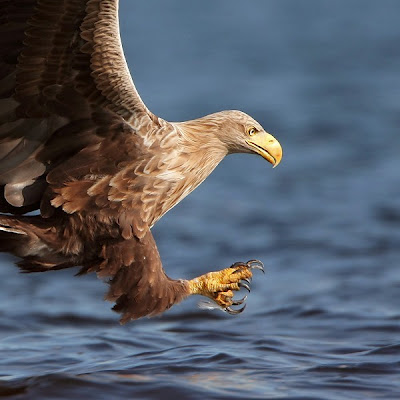 This massive and regal bird is the White-tailed Eagle, otherwise known as the Sea Eagle or Ern (Haliaeetus albicilla). With a body length measuring between 26–37 inches and a wingspan of 5.8–8.0 ft, this isn’t exactly a little chickadee. These birds are close cousins of the North American Bald Eagle and they occupy about the same ecological niche, just in Eurasia instead.

Normally these birds prey on anything from fish to birds to mammals. However, there has been a single confirmed case of an eagle trying to fly off with a HUMAN child! While this behavior is exceptionally rare, it is incredibly interesting.

One June 5, 1932, Svanhild Hansen, a 4-year-old girl, was playing next to her parent’s farm house in Norway when a White-tailed Eagle grabbed her by the back of her dress and flew with her to its eyrie. The eyrie was 800 m (2,600 ft) up the side of the nearby mountain and about 1.6 km (0.99 mi) away in flying distance. The eagle dropped the young girl onto a narrow ledge about 15.2 m (50 ft) below the nest. After being discovered by a quickly formed search party, the little girl survived with no major injuries, ultimately having kept her talon-pierced dress throughout her life.[source]

It was also found that in Orkney, Scotland, sea eagle bones have been found in 6000 year old burial mounds, suggesting that the birds were revered by the prehistoric people there, a belief strengthened by the Pictish stone carvings of sea eagles from Orkney. No wonder they wanted to stay on their good sides!

There Are Two (wild) Sides to Every Frog