Take a Look at this Bizarre Shark Ray. It’s a Shark… Ray… Thing.

Well, looks like a stingray and a shark got together for a romantic evening at some point during the course of their evolutionary history and created what we now know as a Shark Ray (Rhina ancylostoma), otherwise known as a Bowmouth Guitarfish. At least, that’s how I imagined this weird creature came into being. In reality, it’s a species of ray related to guitarfishes and skates, and the sole member of the family Rhinidae.

These guys grow to around 8.5 ft in length and can weigh anywhere around 300 lbs. That’s a whole lot of shark…ray…shark ray.

Unfortunately, this fascinating creature is listed as ‘Vulnerable’ due to the fact that these fish are caught as bycatch by commercial fisheries. The only part of the fish used in human consumption are the pectoral fins, and these are taken by carelessly killing the fish, cutting its fins off, and then throwing the body back into the water. Sometimes the meat is sold in Asian markets salted or dried though, too.

Since this species is so rare and facing such serious threats, it has been labeled the “panda of the aquatic world.” In 2007, the Newport Aquarium initiated the world’s first captive breeding program for this species. Hopefully with their help in addition to conservation efforts we can protect this incredibly cool creature!

Hungry for Some Hammer-headed Fruit Bat? 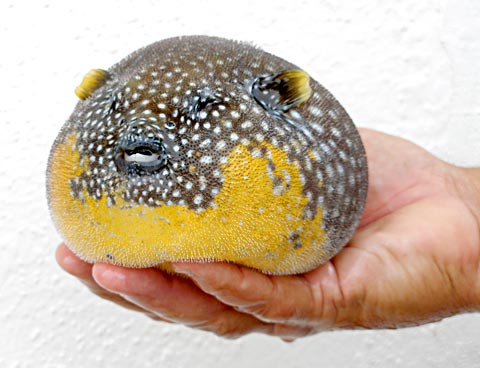 Puff, Puff, and Away! Guineafowl Pufferfish