Happy 4th of July to all my American readers! I wanted to really go out with a bang before the long weekend, so I figured hey, let’s do a post on a creature that’s so cool it makes its own fireworks happen. Okay, ish. But still, look at this thing, it’s pretty freakin’ awesome:

These are Stinging Nettle Slug Caterpillars in the family Limacodidae which will eventually turn into some species of Cup Moth. The exact species of this caterpillar isn’t even known to science, so that’s why photographer John Horstman (itchdogimages, SINOBUG) has been nicknaming these species to help him when it comes time to catalogue his treasure trove of unknown creatures.

He’s nicknamed this one “The Clown” for its garish theatrical coloration.

SO you may be asking, “where do fireworks come into play here, exactly?” Well, my anonymous made-up reader, let me answer that for you.  Stinging Nettle Slug Caterpillars have almost every kind of protective mechanism in existence up their sleeves’. They have incredibly bright warning coloration that basically says “I taste like *insert vomiting noises*” or “Nuh, uh, uh… I’m veeerrrryyy poisonous, wouldn’t touch me if I were you!” Then, false eyes pointing in every direction to say “I’m watching you, you can’t surprise me”; a head end that looks the same as the rear end so there can be no potential surprise attack from behind; and specific to the Limacodid caterpillars (who actually have no true legs, hence the slug in their name), a sticky adhesive underside that makes them very difficult to pry off their food plant. With that in mind, stinging nettle caterpillars are often not hard to find. They don’t conceal themselves day or night and will often be in the most conspicuous of locations. Basically, they have little to fear. (glorious description of these buggies by Mr. Horstman).

The defense mechanism most pertinent to our discussion today, though, is their multitude of stinging barbs, which you can see clustered together in groups in the photo below, looking like neatly kept witches’ broomsticks. This is the position they will remain at while the caterpillar is at rest, or, better put, ‘in a good mood.’

If something were to tick it off, it would unfurl those barbs in the blink of an eye. Intertwined with the barbs are tiny hairs that can inject venom from poison sacs carried at their bases. If a human were to get involved here, an itchy, burning rash would quickly ensue.

So, to wrap things up, these guys are like mini insect firework shows! Except, instead of producing glorious treats for the eyes, they offer insanely itchy rashes. Yay! On the bright side, though, they are extraordinarily beautiful and we know very little about these fascinating creatures. We knows, they might produce fantastical light shows after dark…. but I wouldn’t bet on it. 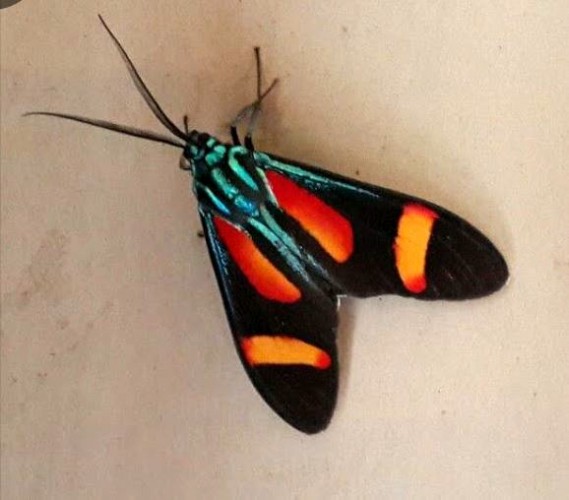