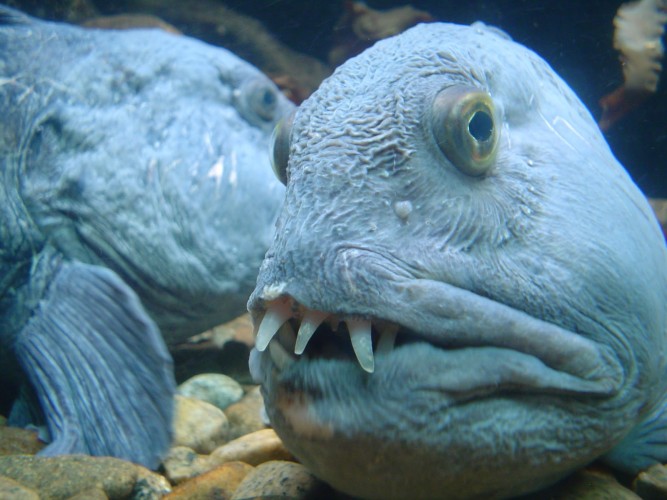 Let’s face it. When we go to the dentist, we’re usually somewhat scared. With these guys, though- it might be the other way around. Few dentists would want to go poking around these teeth, no? Bottom line- not all fish smile like Dory and Nemo. (Dory set a box office record– she has plenty of reason to smile.)

But I digress. Not all smiles were created equal.

Let’s take a peek at some Fishy Friends with distinctive chompers, shall we?

This is the guy who got picked on in school. The overbite just got in the way every time. But he got even- braces by 7th grade, dated Chrissy Teigen before John Legend, and now he’s CEO of a Fortune 500.  Seriously, meet the Atlantic Wolffish (Anarhichas lupus). (And yes, Wikipedia spells it as one word.) He goes by several names- Devil Fish, Seawolf, and Sea Cat (what?) among them.

They live in both the west and east coasts of the Atlantic. Besides his unique look, his body produces its own antifreeze- really- to keep the body warm in the very deep sea chill. That might explain the blue-ish tint? These fellows are also endangered, so hands off ’em. (Pro Tip for cocktail parties; in Iceland they’re called “steinbítur,” which literally means “stone biter.” So we’re gonna go out on a limb and say that bite might smart a bit.

They don’t eat other fish, either (fish are friends, not food) but rather dine on hardshell molluscs, crustaceans, and echinoderms. Quoting Wikipedia, they are an “Important predator of sea urchins and green crabs, whose populations escalate rapidly and can negatively affect the health of a marine system.” Translayshe: everyone has his spot in the food chain (no matter how strange your teeth are).

Prev
Next
The Sheepshead (Archosargus probatocephalus) is most commonly found around the coastal waters of southwest Florida. They’re what I like to refer to as “crushers” – they use their almost human-like teeth to grind up the hard shells of crustaceans, small shellfish, and barnacles. They have incisors, molars, and grinders much like we do.

However, they have several rows of teeth, which is where we differ from these fish friends. Note – if you feel like you have more in common than the rest of us, I suggest heading to your dentists office ASAP.

Sheepshead can grow up to around 91 cm in length and weigh up to 9.6 kg. They also sport five to seven distinctive black, vertical bars running down their silvery bodies, which is why they are also called the convict fish. Which, actually sounds pretty bad ass, if you ask me.

So, if you’re a guy, you might have heard about this fish when it made waves in June of last year when it was discovered in a New Jersey lake. These fish are originally from the Amazon (which, last I checked, was a bit out of the way from Jersey). Aside from conservationists being up in arms about the obvious dropping of a foreign creature into a new environment, men were particularly scared after learning of the Pacu’s other name: The Ball Cutter Fish. Yes, you read that correctly.

No need to fear, though, men! The story of the Pacu attacking a man’s package isn’t true. In 2013, a pacu specimen was found by a fisherman in Denmark which led to media reports mistakenly warning that the fish could attack male testicles. The reports were based on a joke that was not meant to be taken seriously. However, just the mere thought of such a creature existing sent chilling fear down the spines of men worldwide, leading the rumor to persist.

Queensland Groupers (Epinephelus lanceolatus) are da big boys (and girls) of the Aussie fish world. They can reach up to 880 lbs and just under 9 ft in length. You might expect that they have some mega chompers to match their mega mouths, but then you’d be wrong. Actually they have several rows of very pointy, itty-bitty teeth blanketing their gaping mouths.

Don’t be fooled by the amount of power packed in those lil teeth, though! Queensland Groupers are definitely carnivorous and go after everything from other fish to SHARKS. Its small teeth are like having thousands of piercing needles rammed into your skin and bone. Ouch.

A fun fact about the Queensland Grouper: it was the first fish to ever undergo chemotherapy! The fish’s name was Bubba and he lived at the Shedd Aquarium in Chicago.

No ‘weird fish with strange teeth list’ is complete without the addition of the deep sea-dwelling Dragonfish (Grammatostomias flagellibarba). Its long fangs and slithery body make it one of the most iconic and weird fish of the deep sea.

However, photographs of these fish can be deceiving. While the teeth are quite large in relationship to its body, the actual body itself only reaches about 6 inches in length! So, basically we are dealing with a tiny fish with a big attitude.

Beyond its ferocious teeth, the Dragonfish has another perfect-prey-catcher up its sleeve: a long protrusion known as a barbel attached to its chin. This barbel is tipped with a light-producing photophore, which glows to attract unwitting dinner guests. Since many of their meals also possess bioluminescent properties, the walls of its stomach have evolved to be black to keep any light from escaping and giving away its position in the darkness.

BUT just remember, that as terrifying as this creature looks… it begins its life as a spaghetti monster.

And…we wrap things up with Mr.Deep Sea Hatchetfish (Sternoptychidae family). (This is the expression Golden State Warrior fans had after Game 7, FWIW). They live way down deep and their bodies have had to adapt to the pressure, much like the Wolffish does with the temperature.

I included these guys not because of their terrifying teethies… but because of how frightening they look without them. Honestly, I think these things look like something out of a Steven King novel.

Fortunately, they A. live at the bottom of the ocean and B. are only 10 cm in length. I really do feel sorry for it though, always looking so sad and whiney. If I could talk to a Deep Sea Hatchetfish I would say “hey you – yes, you! Turn that frown upside down!”

While that would all be happening a giant squid would swim up behind me and give me “hugs.” Yeah… I’m gonna stay on land. 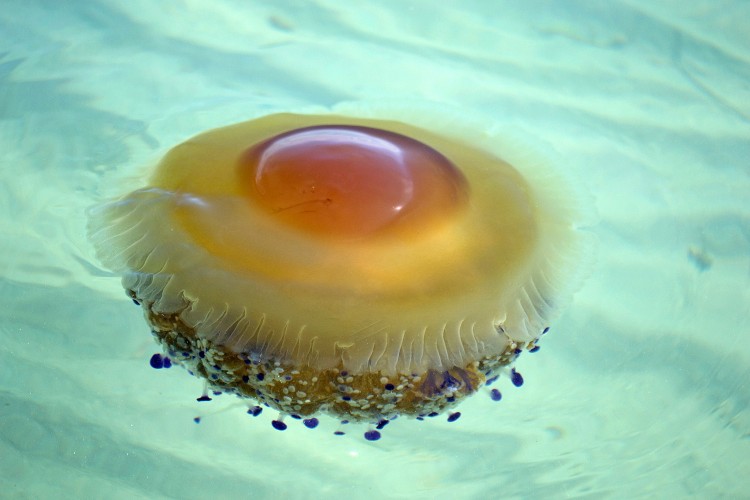 Fried Egg Jellyfish Are Kind of Adorable – & That’s No Yolk. 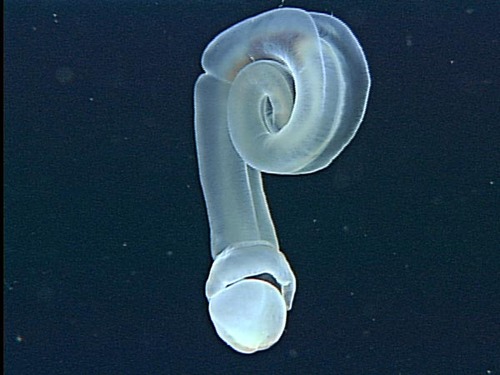