This species of Sea Slug, Flabellina goddardi, or less formally known as the Fiery Sea Slug, was just discovered in 2008 when Marine Biologist Jeff Goddard was searching for another type of sea slug. Instead of finding that one, he ended up making this discovery!

After collecting the sea slug and taking it to a lab, it later laid a lacy egg mass which then hatched into tiny babies. The egg mass is formed that way so that each baby is capable of receiving enough oxygen.

The new species has a “tooth-studded ribbon” called a radula to catch prey. Interestingly, it has less teeth than other sea slugs it is closely related to.

Pictured in this microscopic image are the embryos contained within the egg mass. 0.1-millimeter-long babies hatch into shelled larvae after about a week after the eggs are laid. The babies feed and grow on plankton in shallow waters off California for a month or two before they settle, metamorphose, and start eating adult food.

**Thanks to Chelsea Lindsay for showing me this great article! I love when people send me things, so if you have something you’d like me to post about please don’t hesitate to do so! 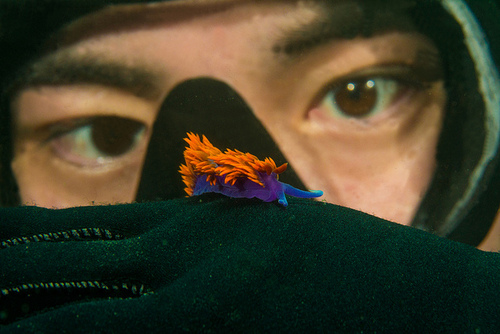