New Species of Golden Bat? Yeah, I’m Down With That! 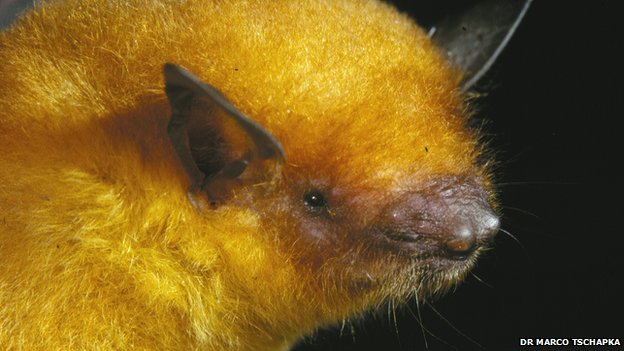 All that glitters isn’t gold –  but it is in fact, bat, apparently. Meet the newly reclassified King Midas bat (Myotis midastactus) aptly named for its brilliant gold fur that’s rather uncommon in the bat kingdom. In fact, there are only a handful of bats that have this distinct coloration in South America, it’s original namesake Myotis simus being one of them.

After a team of animal researchers examined 27 specimens housed in American and Brazilian museums, they confirmed that this was definitely a different species from M. simus. I absolutely love that they gave it the name midastactus, after King Midas from Greek mythology (because, um, Greek mythology is awesome!), who turned everything to gold with a single touch of his hand.

The saffron hue makes sense when you think about where the bat hangs out – in the Bolivian savannah. A light coat allows these little fellows to blend in easily with the billowing savannah grass; if they were to have dark fur like most bats, they’d stand out like bat bullseyes, so darker species are relegated to murky, dense forests instead.

Dr Ricardo Moratelli from the Brazilian Oswaldo Cruz Foundation helped the team responsible for the reclassification. He used his knowledge from a paper in 2011 explaining the differences in bats from areas in Bolivia to others found in parts of South America near the Amazon River. The investigation also found no evidence that M. Simus is even present in Boliva. The morphological analysis of the museum exhibits were a critical part of the reclassification after Dr Moratelli was unable to capture a living M. midastactus specimen after  attempting to do so unsuccessfully for two months.

“I can confidently say that many new species from different zoological groups are in museum cabinets around the world, awaiting recognition and formal description,” said Dr Moratelli on BBC Nature. “Discovering new species is the most exciting part of my research and in some cases describing a new species can be the first step to preserve others.“

Dr Moratelli is responsible for discovering four other species of mouse-eared bats: Myotis diminutusfound in Ecuador, Myotis izecksohni in southern Brazil, Myotis lavali from north-eastern Brazil, and Myotis handleyi from Venezuela. The new golden bat is described in the Journal of Mammalogy where Dr Moratelli — along with his companion, Dr Don Wilson of the Smithsonian Institution —  published their findings.

The Stinky Yet Loveable Musk Ox