Now here’s something you don’t see everyday – a cheetah missing its spots! According to experts, the last recorded sighting of a spotless cheetah was in 1921. Dailymail has the story:

“For the first time in almost a century a spotless cheetah has been, er, spotted.

The mythical-like creature was discovered by a British wildlife photographer who set out to find it after several reported sightings.

Guy Combes, originally from Shaftesbury, Dorset, scoured 100,000 acres of land in Kenya using a Land Rover and even a plane before he tracked it down.

Guy, 41, got within 50 yards of the unique creature that had a plain sandy coat of fur with hundreds of small freckles on its back and no sign of black spots.

And they believe the genetic throwback may actually help the young adult male thrive in the wild as it could be mistaken for a lion.

‘I was really excited as we managed to get about 50 yards away. It was one of the biggest rushes I’ve had in my life. ‘I didn’t expect to see it at all, the area we were going to search was 100,000 acres without borders and he could have easily been beyond that.

Danny Nineham, a big cat consultant from Gloucestershire said: ‘I haven’t seen a picture like this one before, I would say this cheetah is very rare indeed.’

‘To the best of my knowledge and research it was 1921 when a cheetah like this was last seen.

‘The mutant cheetah like any mutant big cat are natural variations that sometimes occur due to spontaneous genetic changes in genes.’

John Pullen, curator of mammals at Marwell Zoo, near Winchester, Hants, said: ‘This is really like a rare skin issue where something has happened to the genetic coding that would give the normal patterning.’

‘This sort of thing is always interesting and personal I love to see these variants that will turn up in the wild.’ 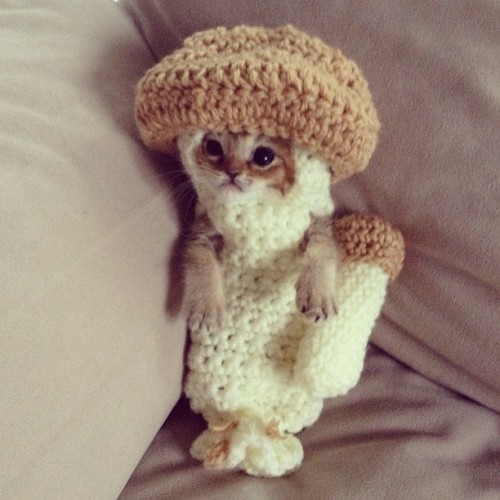 Rescue Kitten, Wasabi-Chan, Taking the Internet by Storm… in a Mushroom Costume

Imagine Being Gobbled Up By This: Goblin Shark