Meet the Electric Disco Scallop, Raver of the Sea

Habitat: widespread throughout the tropical waters of the central Indo-Pacific region from Indonesia to Palau Islands and New-Caledonia
Status: No conservation concerns

The Disco Scallop, or Electric Flame Scallop (Ctenoides ales) is not actually a scallop at all; but it is a hardcore partier. These guys are actually a type of file clams… which is totally different than a scallop, technically.

The clam is known for its spectacular light show display which makes it look more akin to a Tesla coil than a creature of the sea. However, the mechanism by which this electric current was produced had mystified scientists for decades. It wasn’t until the summer of 2014 that the Disco Scallops’ raving secret was finally decoded.

A team of biologists led by Berkeley’s Lindsey Dougherty published an investigation into the luminous abilities of the clam in the June 25 issue of The Journal of the Royal Society Interface. “We don’t know of anything that is quite like the disco clam,”Dougherty told Nature at the time.

Indeed, the clam’s crackling display, long assumed to be a bioluminescent adaptation similar to that produced by angler fish, was much more unique to the species. As Michael Byrne reported last summer, the species manufactures silica spheres capable of manipulating ambient light, as opposed to emitting new light, which is what bioluminescent organisms like fireflies and angler fish do. The feeding side of the clam’s lip reflects light with nanoscale precision, while the opposite side absorbs light, giving it a reddish hue. The luminescent effect is produced by the rapid interaction of the two sides. (source)

To summarize that a little more efficiently, basically the clam’s “electricity” that runs along its mantle is actually produced by tissue which reflects light and can be covered and uncovered to create a flashing display. The change back and forth from the white reflective tissue to the red tissue creates the appearance of flashing.

It is thought that the lights attract plankton to its filamentous tentacles helping it feed from a fixed location.

Hedgehog Fly Please Don’t Poke Me In the Eye :( 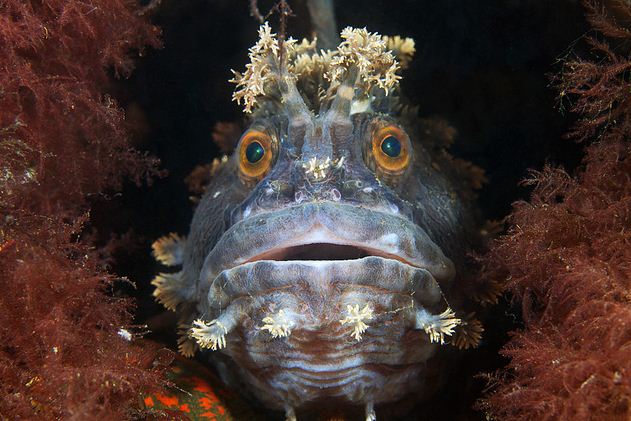