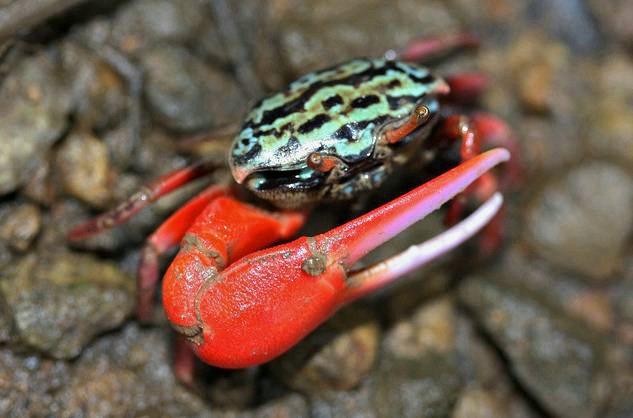 This gorgeous crustacean is called a Watermelon Fiddler Crab (Uca crassipes) due to its unique coloration which resembles, you guessed it, that of a watermelon!

Fiddler crabs make up approximately 100 species of semi-terrestrial marine crabs that are distinguished by their own over-sized claw positioned opposite to a tinier, meeker-looking claw. Fiddler crabs get their names from the movement of the smaller claw to the animal’s mouth when eating – it looks like the smaller claw is playing the larger one, just like a fiddle!

Watermelon Fiddler Crabs , like other fiddler crabs, use their big claw in ritualized combat during courtship of a female by signaling their intentions to other crabs. A large claw may be lost in battle, but no matter because these guys are able to regrow a new claw after their next molt. The process is a little odd however, because the new, larger claw will actually form from the original small claw (it will just increase in size) and the lost claw will become the small claw. The big claw basically switches sides if lost. Either way, a big claw is a big claw!

The Gecko and His Amazing Technicolor Dreamcoat

Now THIS Is What I Call a [Tiger] Moth!