Mammal of the Century: New Species of Tapir Discovered in Brazil 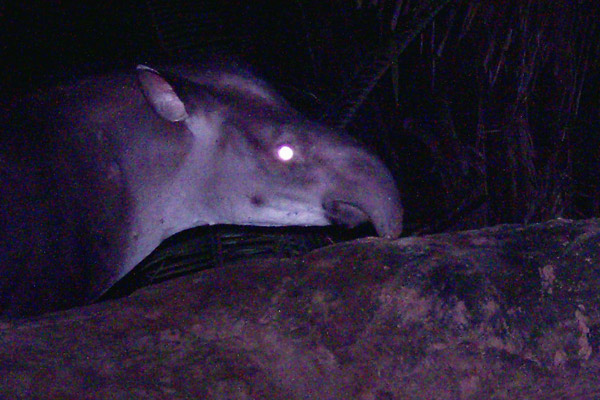 BIG (literally) news out of Brazil today – a new species of tapir has been discovered! Scientists found it wandering the forests of Brazil and Colombia after hearing about it from local tribes people who were already well aware of the huge beast. Those guys seem to just know about everything. But that’s a whole other story.

photo: A pair of Kobomani tapirs caught on camera trap. The individual on the left is a female and on the right a male. Females of the new species are characterized by a light patch on lower head and neck. Photo courtesy of Fabrício R. Santos. Story via Mongabay

The new tapir is actually one of the largest mammal species found on the continent, though still the smallest tapir species known. It has been given the name Tapirus kabomani after the name for “tapir” in the local Paumari language: “Arabo kabomani.”

Tapirus kabomani, or the Kobomani tapir, is the fifth tapir found in the world and the first to be discovered since 1865. It is also the first mammal in the order Perissodactyla (which includes tapirs, rhinos, and horses) found in over a hundred years. In addition, it’s the largest land animal to be discovered in decades: the discovery of the Saola in 1992 in the rainforests of Vietnam and Cambodia was the last to be found. Needless to say, this tapir is kind of a big deal.

Mongabay (one of the best environmental news websites out there, IMO) was the first to break the news on this wonderful discovery. From their site:

Found inhabiting open grasslands and forests in the southwest Amazon (the Brazilian states of Rondônia and Amazonas, as well as the Colombian department of Amazonas), the new species is regularly hunted by the Karitiana tribe who call it the “little black tapir.” The new species is most similar to the Brazilian tapir (Tapirus terrestris), but sports darker hair and is significantly smaller: while a Brazilian tapir can weigh up to 320 kilograms (710 pounds), the Kabomani weighs-in around 110 kilograms (240 pounds). Given its relatively small size it likely won’t be long till conservationists christen it the pygmy or dwarf tapir. It also has shorter legs, a distinctly-shaped skull, and a less prominent crest.

“[Indigenous people] traditionally reported seeing what they called ‘a different kind of anta [tapir in Portuguese].’ However, the scientific community has never paid much attention to the fact, stating that it was always the same Tapirus terrestris,” explains lead author Mario Cozzuol, the paleontologist who first started investigating the new species ten years ago. “They did not give value to local knowledge and thought the locals were wrong. Knowledge of the local community needs to be taken into account and that’s what we did in our study, which culminated in the discovery of a new species to science.”

“[Indigenous people] were essential,” co-author Fabrício R. Santos told mongabay.com, “particularly because they know about this ‘variety’ for decades, if not, centuries, and the hunters can precisely differentiate both species, because all of skulls they provide us matched our morphometric and DNA analyses.”

Be sure to read the full article over at Mongabay!

A Face Only A Mother Could Love: Wrinkle-Faced Bat

All I See Is Cute: The Golden Mole