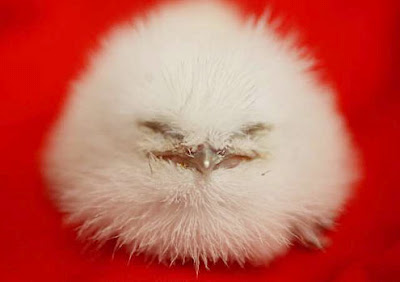 May I present to you one of the cutest (and coolest) birds in the animal kingdom: the Tawny Frogmouth (Podargus strigoides). These guys pass through three stages (according to me) that lead it to ultimately become… a branch. Don’t worry, you’ll understand what I mean soon enough!

Stage 1: The Puff of Fluff

© trixie benbrook
The first (and best!) stage of the Tawny Frogmouth is when it first hatches. These almost too-cute-to-be-alive chicks resemble cotton balls or pom-poms. Tawny Frogmouths are known for their extremely wide mouths which are already evident in these photos.
Stage 2: Hopping Lint

© Jason Collier, SeaWorld Orlando
I feel like these are the bird example of “dust bunnies.” As the Tawny Frogmouth grows its brown feathers start to come in. This is the ‘awkward’ phase of a Frogmouth’s life, I’m assuming, since no one really wants to look like a big pile of collected lint.

Stage 3: A Branch is Born

After much adieu we arrive at the branch stage. Now you’re probably still asking, what the heck is she talking about? Well, Tawny Frogmouths have a little trick up their sleeve. Once full grown, their method of escaping predators is to make it seem as if they were never around to be caught in the first place. They basically camouflage themselves into branches so well that it’s hard to spot them in the forests of Australia. The pose they strike combined with their bark-colored feathers makes this creature a master of disguise… but there’s still no masking its journey from cute to extreme camouflager!