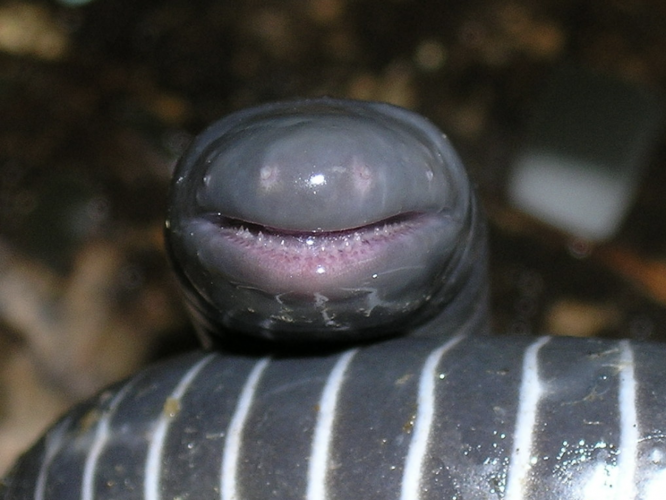 You might thing this looks like some kind of mutant worm or slimy snake, but in reality it’s simply a caecilian – an amphibian that superficially does resemble those creatures but is actually entirely different from them.

This particular species is the Ringed Caecilian (Siphonops annulatus) and like other caecilians it spends most of its time burrowing around underground. Ok now for the totally crazy part: when momma caecilians have their nestlings with them their favorite food just so happens to be… skin. Momma caecilian skin. That’s right, when the babies are hungry they start feasting on their mother’s outer layer of skin for a full seven minutes then they take a break for three days while she regrows the layer (girl’s gotta have skin, right)? This phenomenon is known as maternal dermatophagy. The babies even come fully equipped with 44 spoon-shaped teeth for extra easy muchin’ power.

While it may look innocent, baby ringed caecilians come equipped with razor-sharp teeth, hungry for flesh…

This is the second caecilian that I’ve written about with flesh-eating babies. You can read about the other one, the Cobra Bobo.

Update 1/20: Researchers have now discovered that in addition to having *ahem* rather peculiar eating habits, the ringed caecilian also contains specialized mucous glands in the upper and lower jaw that produce, what they believe to be, venomous secretions (though, more research is needed to confirm this). If this does turn out to be the case, then it’s an early evolutionary design of oral venom organs — a.k.a., a big deal! It means that venom glands could have evolved in caecilians earlier than they did in snakes.

Scientists think that the ringed caecilian may use the secretions from these snake-like oral glands to incapacitate its prey. Image credit: Mailho-Fontana et al, doi: 10.1016/j.isci.2020.101234