© acornpoultry
Habitat: Domesticated
Status: No Conservation Concerns
This cross between a pine cone and a chicken is a type of fancy chicken (oOo you fancy huh?) called the Polish Frizzle Bantam. Frizzled chickens are not so much a breed, as a type of bird. Any breed of chicken can be bred to be frizzled (thank God) but the most commonly seen Frizzles are based on Cochins, Plymouth Rocks, Japanese, and Polish chickens.
The reason that these birds look like big puffballs is due to the presence of a mutated gene that makes their feathers curl. Where normal chickens have feathers that rest flat against their bodies, frizzles, with the effect of the F gene (frizzling), makes the feathers actually curl or spiral, lifting the feathers up and away from the body.
As you might imagine, Frizzles aren’t really great fliers and their feathers are actually more prone to breakage than regular chickens. That being said, I wouldn’t want them to be able to fly anyways since I would never want them to escape from my loving arms. Ever. My frizzle. Mine.

The Art of the Ball-bearer Leafhopper 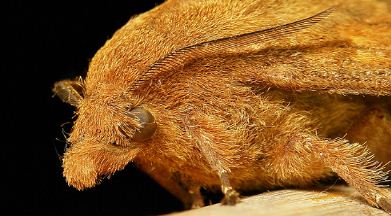