Here’s a sight you usually don’t get to see! These rhinoceroses were transported via military helicopters to new bushland in South Africa where the WWF hopes to increase the population of these huge beasts. The animals are in danger from poachers who are after their horns (what god awful humans… makes me sick to even think about someone hurting one of these creatures).

Via Dailymail: Dangling from cords tied to their ankles, 19 hulking animals were transported out of the South African hills inaccessible by road in the country’s Eastern Cape. And these incredible images show exactly how conservationists used a military helicopter to carry the herd of 1,400-kilo rhinos to their new home, away from poachers.

Conservationists put the endangered beasts to sleep and hoisted one at a time for the 15-mile flight. The big move was orchestrated by World Wildlife Fund experts, who yesterday drove the rhinos 1,000 miles to fresh breeding ground in the northern Limpopo province.

Today photographer Michael Raimondo, who captured the spectacular scenes, said each animal spent around 20 minutes in the air. He said: ‘It was quite incredible. These things are so heavy – some of them weigh a couple of tons.

Black rhinos are under threat across Africa, where poachers in safari parks and private reserves kill and maim the beasts for their horns. New figures published today by the WWF revealed that more of the vulnerable animals have been slaughtered in the first 10 months of this year than during the whole of 2010.

Official statistics show that that 341 rhinos have been lost to poaching this year in South Africa, compared to 333 last year. The precise locations were not revealed in an effort to prevent criminals from targeting the animals.

WWF project leader Jacques Flamand helped revive the animals after each helicopter journey, which took place around half a mile above the ground. He said: ‘The operation was difficult due to the number of animals and the long distances involved.

‘But wildlife veterinarians, conservation managers and capture teams worked cooperatively to ensure the success of the translocation. We were united in a common cause.’

The project was the first of its kind in South Africa, but previous trips with elephants in Malawi demonstrated how humane the procedure could be. Dr Flamand added: ‘Previously rhinos were either transported by lorry over very difficult tracks, or airlifted in a net. ‘This new procedure is gentler on the darted rhino because it shortens the time it has to be kept asleep with drugs, the respiration is not as compromised as it can be in a net and it avoids the need for travel in a crate over terrible tracks.’

The operation is one of many conservation attempts to curb the death of the animals, which are classified as ‘critically endangered’.

The increase in illegal hunting has been fuelled by a demand for horn in the Far East, where it is ground up and used in traditional medicines. Earlier this year experts said the substance was being sold on the black market for around POUNDS 35,000 a kilogram – making it more valuable by weight than gold.

A world-first scheme launched in June saw a DNA database of rhino horns set up to crack criminal networks that kill and torture the beasts. Black and white rhinos are popular sights in South Africa’s array of game parks, which are visited by millions of tourists every year, many from Britain.

A Dead Ringer For a Dead Leaf 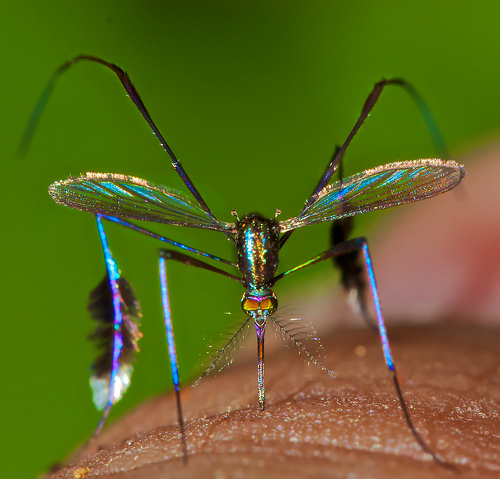