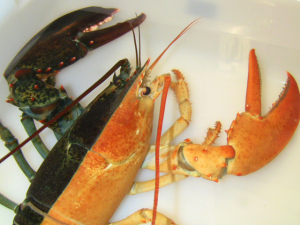 A lobster with an orange and black side, perfectly split down the middle has arrived at the New England Aquarium, in costume, just in time for Halloween. The New England Aquarium said the lobster came from a lobsterman named Dana Duhaime from Salem. He discovered the one pound, female lobster in his traps off Bakers Channel of Beverly.

Bill Murphy, an aquarium biologist, picked up the seasonally colored crustacean Sunday, according to Aquarium officials. The New England Aquarium says 2012 has been an exceptional year for a plethora of strangely colored lobsters from yellows to blues and calicos. “Split” lobsters are even more bizarre as they can feature two distinct colors on each side, they say.

Split lobsters are roughly estimated to occur once in every 50 to 100 million lobsters .Duhaime named the two-toned lobster Pinchy in honor of a giant lobster that appeared in a Simpsons TV episode.

After a quarantine period, the lobster will either be on exhibit in one of the Aquarium’s New England habitat tanks or used for live animal presentations, the aquarium said. (link)

Don’t forget to check out these other weirdly colored lobsters that have previously been featured! 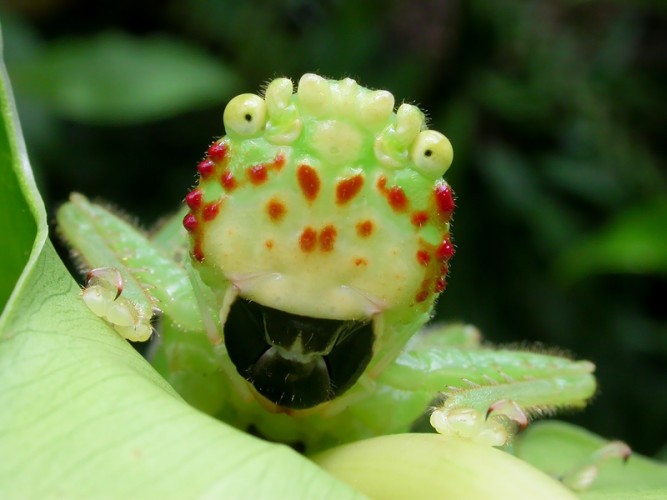 Top Dog of the Rainforest: the Carnivorous Pitbull Katydid

If Pokemon Were Real: Animal Hybrids I Wish Existed.. Er, Most Anyways.