All Hail the Royal Starfish, Decadently Dressed in Purple and Gold 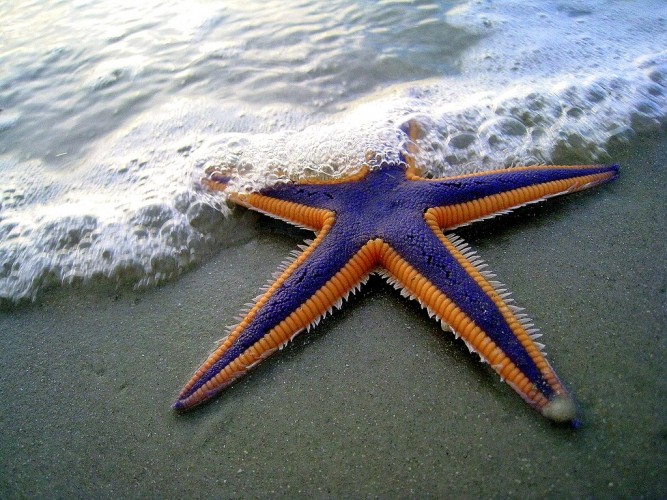 Habitat: found along the east coast and commonly along the southeast coast of the United States
Status: Not Evaluated

The Royal Starfish (Astropecten articulatus) is unbelievably epic; draped in decadent purple and gold hues just laying in the sand for the world to admire. Each of its arms is about 2–9 centimetres (0.8–4 in) in length and its mouth  has a set of five jaws covered with spines. That’s right, this thing has five jaws! All the better to munch you with – or, in this case, swallow you WHOLE!

Unlike other starfish, the tube feet of the Royal Starfish lack suckers and have rounded or pointed tips. They use the tips of their arms to dig around in the sand in search of prey. Small clams are a favorite dish for the Royal Star and the starfish wastes no time in eating its meal. It will eat the entire thing whole (unlike other starfish) and then regurgitate the indigestable shells through its mouth because it happens to lack an anus. So yeah, it eats and poops out of the same opening. Doesn’t that sound appetizing?

Royal Starfish have been known to overeat and when they do so they run the risk of rupturing their central disk. If it happens to overeat you can actually see the middle of the starfish bulge out like a big ol’ beer belly. When you’re royalty, doing things to excess just comes along with the territory.

Mr. Who? A Madagascan Frog with Many Names