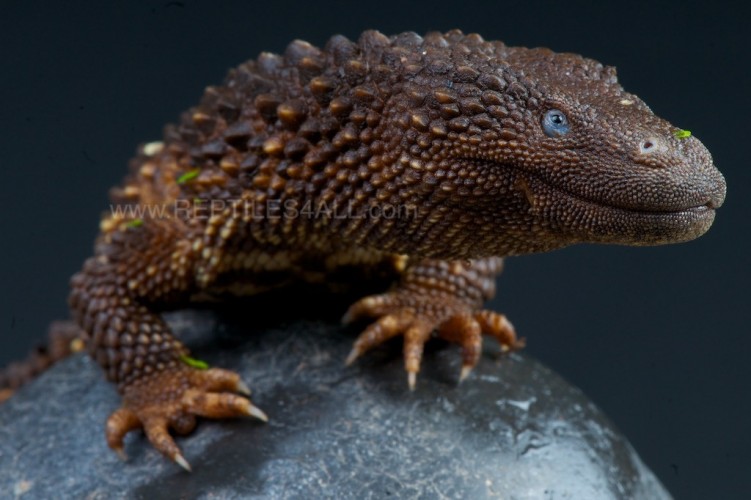 No, this isn’t a baby Godzilla; but it may be just as rare as one! This is the Borneo Earless Monitor (Lanthanotus borneensis) which can only be found in – you guessed it – northern Borneo.

The prickly creature was first described in 1878 but don’t feel bad if you haven’t heard of it before then. You haven’t been living under a rock, but the Earless Monitor has! You see, the lizard is very rarely seen do to its subterranean, nocturnal lifestyle. So little is known about the earless monitor that even the IUCN Red List of threatened species has yet to evaluate it! At around 8 inches long, the animal lacks any external ears–hence its name–and sports short limbs and beady eyes with a translucent window covering the lower half. It’s so distinct from other lizards that it’s the sole member of its family, Lanthanotidae. It’s morphology links it to a 70 million year old fossil from Mongolia and hence is sometimes referred to as a living fossil.

However, it’s anonymity has recently been plundered after photos of the lizard began popping up on herpetology collector forums. Due to its unique, dragon-like appearance, the lizard became an instant hit with the community. This spurred an incredible uptick in illegal trafficking from Borneo.

The lizard started to show up in social forums in 2012 and since then TRAFFIC believes there has been a spike in illegal collecting. In fact, the organization has been tipped off that 40 individuals were stolen from the wild just this spring. If true, that’s three times as many individuals as were recorded in the first 80 years since scientists discovered it.

“Our research highlights the importance of the Internet and social media in the trafficking of species in high demand by specialist collectors: the reach online traders have is both instant and global,” said report co-author Sarah Stoner, Senior Wildlife Crime Analyst at TRAFFIC.

The group has documented earless monitor lizards illegally for sale in Japan, the Ukraine, France, Germany, and the Czech Republic.

“Earless monitor lizards existing outside range countries have all been obtained illegally. Parent stock has been illegally obtained, stolen from range countries, and therefore, by extension, the offspring of these animals are illegally sourced,” reads the report, which adds that penalties across the three range states range from one year in prison and $1,600 fine in Brunei to five years in prison and a fine of $8,600 in Indonesia.

The plea is out for the international community to recognize the importance of protecting this modern day ancient creature. So, Featured Creature fans, please help by sharing this post so that we can spread the word about saving the Borneo Earless Monitor!

h/t to Mongabay for the original story.

Edit: I just want to resolve some confusion around this post. In no way am I talking about captive breeding programs that are trying to help save this species. I am only referring to illegal smuggling of specimens out of its native country. Anyone who is helping to save this species, whether they are in the reptile trade or what have you, is a friend of mine. So, I apologize to those who thought I was putting down the reptile community. I was putting down the illegal smugglers that were taking advantage of these kind people who are just trying to help the reptile world.

Also, smuggling isn’t the largest problem the species is facing; it’s deforestation in the area, largely due to the slash-and-burn techniques palm oil manufacturers are employing. I implore you all to learn more about this tragic reality and see how you can help prevent any more creatures from losing their homes. Here are some articles on the palm oil problem to get you started:

From the Depths of the Underworld Comes the Mud Snake