This hairless yet incredibly adorable baby kangaroo is named Sabrina. She was abandoned soon after she was born by her mother and is now being cared for by staffers at the Serengeti-Park, Hodenhagen, in Germany. She’s a lucky little thing (relatively speaking), too, as the keepers hadn’t even been aware that her mom was pregnant! Dailymail first had the story:

“She might be a joey – but this miniature kangaroo is a very lucky female kangaroo called Sabrina.

The tiny frail looking creature was abandoned by her mother at the Serengeti-Park, Hodenhagen, in Germany.

She was a surprise addition to the zoo after she was discovered lying in the grass in the kangaroo enclosure – and no one knew her mum, Urmel, was pregnant.

One theory is that shortly after Sabrina was abandoned because of stress because Urmel escaped the zoo shortly after giving birth – and rejected her baby when she returned to her enclosure.

The hairless joey is now being cared for by keepers and must be constantly carried close to the body or wrapped up in blanket to keep warm.

The animals do not develop hair unless later in life as they would normally not emerge from the mother’s pouch.

The delicate 9.8inch tall kangeroo, who weighs just half a pound, is also being fed with special milk five times a day.

Now aged three-months-old is doing well and is slowly putting on weight.

One of the keeper’s said: ‘Her coat won’t develop for another month because she would normally still be in her mother’s pouch.

‘The mum had escaped from the park just after Sabrina was born and abandoned her when we got her back, we think because of the stress.'”

Best of luck to you little Sabrina! xo 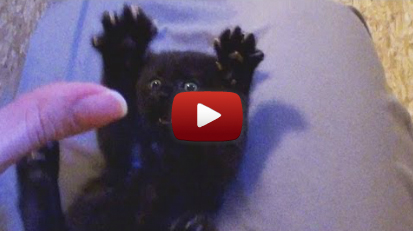 Merry Christmas From the Creatures!