Here is one of the most alien lifeforms I’ve ever read about… that’s found right here on Earth. These are Tardigrades, or more commonly called ‘water bears’ or ‘moss piglets.’ These peculiar beings look like miniature gummy bears but are really microscopic animals that live in the water, are segmented, and have 8 legs. The name water bear comes from the way that they walk, which resembles that of a lumbering bear. The largest adults may reach lengths of around 1.5 millimetres, whereas the smallest may reach lengths below 0.1 mm. Typically you can find these guys on lichens or mosses, which is where their other name of ‘moss piglet’ stems from.

One of the most interesting aspects of the moss piglet, or water bear, is the ability it has to survive, and even flourish, in environments that we typically think of as uninhabitable. Some can survive temperatures of close to absolute zero (which is −459 °F, mind you); others can withstand temps as high as 304 °F. Not only that, they can take 1,000 times more radiation than other animals, and can go a DECADE without water! Insane!!!

Oh, and last but not least, they can survive in space. So watch out, because water bears might take over the universe someday [soon].

how cute is this little fellow?!

Oh, and if you’re looking for a last minute holiday gift for the science/animal lover in your life… look no further than a 3D-printed tardigrade from Shapeways! I just ordered one myself and am probably the most excited I’ve been since um…. a really long time. Check it out:

The one I got was printed in colored sandstone, but they come in a variety of colors – from sassy red to pure gold (yes, like real gold). Head over to the Shapeways store and make sure your stocking stuffing is complete with your very own moss piglet! 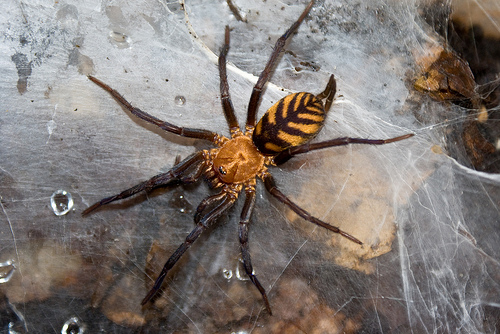