Cinereous mourner (Laniocera hypopyrra) chicks are taught from a very young age, like, birth, one very important saying. It’s so important that their lives actually depend on them mastering it. The saying: Be the bug.

You see, a recent study published in the journal American Naturalist, describes how the cinereous mourner (Laniocera hypopyrra) is covered with bright orange and speckled down-feathers when it is first born… and how the bird uses those feathers to imitate a poisonous caterpillar, reducing its chances of predation.

Experts Gustavo A. Londoño, Duván Garcia, and Manuel Sánchez Martínez found the cinereous mourner’s nest (the second only to be discovered) and were struck by the bizarre plumage. While they were taking morphological measurements, they also noticed the strange behavior that the chicks displayed. They would wiggle their heads back and forth, much like caterpillars do. It wasn’t until a bit later when the investigators found a poisonous caterpillar with similar size and hair coloration as the nestling that they determined this might be an example of Batesian mimicry in which the baby bird was mimicking a massive, poisonous caterpillar.

The first 18 days of the cinereous mourner’s life is the most dangerous, as that’s the time when it needs to stick to it’s “be the bug” strategy, or else. Baby birds knew enough to even keep up appearances while mom was away. They lie on the floor of their nests, with their beaks and legs tucked into their furry feathers until they hear a special “all clear” call from their parent. That’s the only way they will make the transformation from caterpillar to cute begging baby bird.

Londoño told New Scientist that this is actually the first example of such complex mimicry ever seen in avian young, and likely developed under the unusually high predation pressures of the Amazon basin in South America.

“Mimicry plays a major role in deterring predators, but camouflage is also likely to occur when the nestling is on the nest,” he said. “To know more about the relative importance of these strategies in this species, we need studies with larger sample sizes.”

You can view the full article, here. 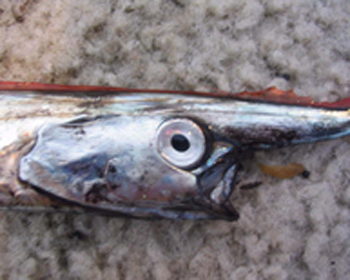