Banded Rubber Frogs Are Quite the Interesting Amphibians 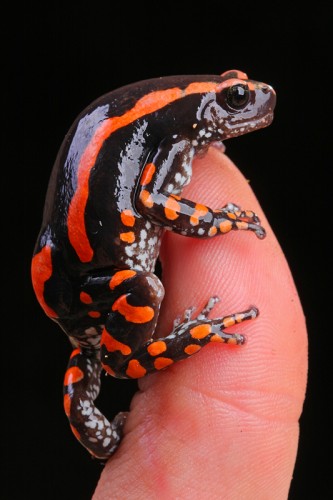 Ah yes, the Banded Rubber Frog (Phrynomantis bifasciatus). Not only is this little frog quite beautiful, it has also got some  unique features that make it especially interesting. The Banded Rubber Frog is not the only moniker this creature is known by, it’s also referred to as the Red-Banded Crevice Creeper because it seeks out any tight space or crevice in which it could tuck its tiny body (2-2.5″ depending on the sex) to seek shelter for the day. And then it is also called the Fire Walking Frog due to its preference for walking, instead of hopping, to get where it needs to go.

No matter which name you choose to call it, though, the Banded Rubber Frog is easily recognized by its bright reddish-orange bands set against a black body (which is rubbery in appearance – hence its common name). The vivid coloration alerts predators that this is a poisonous frog, however normal handling of this frog is generally safe for humans. You do run the risk of getting poisoned if you have an open cut or scratch on your hands, however. Symptoms of a poisoning include painful swelling, difficulty in breathing, headache, increased heart rate, and nausea but these only last about 4 hours.

Another special aspect of this frog is its crazy tongue. It can shoot out in an arc greater than 200 degrees, which means that it’s able to catch prey that’s to the side of its head or even slightly behind it! I’m imagining it to look almost like a frog tongue lasso.

Now, the last cool feature of the Banded Rubber Frog is its singing voice! It almost sounds like a bird, rather than a frog! Take a listen below: