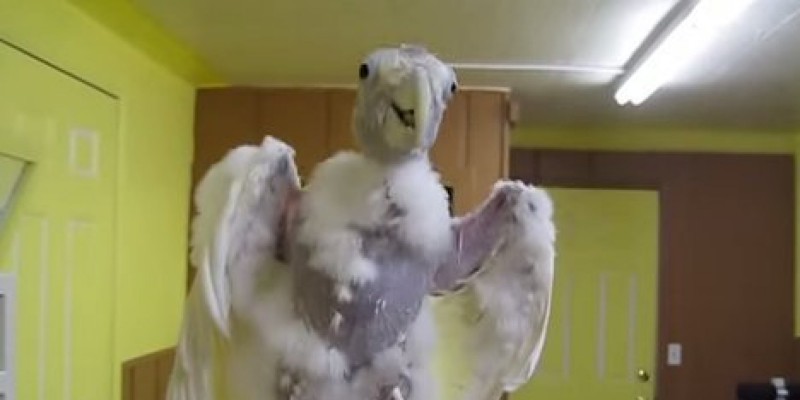 King O the bald cockatoo’s naked little head hints at how stressful his life used to be.

“He was very attached to his first person, and from all accounts he had a wonderful life with her. When she died, he grieved for her,” says Jacqueline Johnson, who runs the bird department at Best Friends Animal Society. “His next home was with a family member who had no idea how to help him cope with his loss and grief. That is when he started pulling out his feathers with his feet.”

The new owner reached out to Best Friends to see if the bald cockatoo might be happier living at the group’s massive sanctuary in the red hills of southern Utah, which is home to some 100 birds and 1,600 other animals, including dogs, cats, horses, pigs and bunnies.

Indeed, the 15-year-old — originally mistaken for a female and named Ophelia — has been quite jovial in this home, where he’s lived since 2010, and has been given his own little apartment adjacent to the staff office. (Just check out the cockatoo singing and dancing! – link below)

He gets lots of attention, lots of treats and daily dance parties. Yet, he still keeps pulling out his feathers.

“O is a happy bird now,” says Johnson, “but the feather destructive behavior has become a habit.”

Yummy, I’ve Got Bugs In My Tummy: Bat-Eared Fox