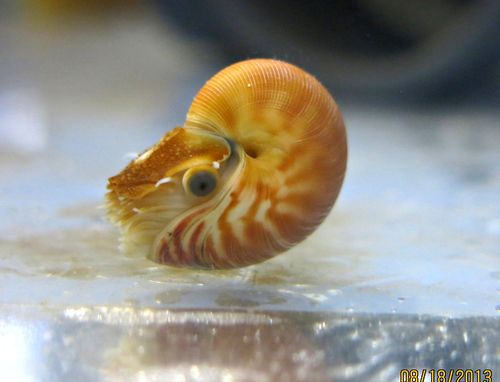 Welcome to the world baby nautilus! This adorable cephalopod was recently born at the Birch Aquarium at Scripps, making it one of only a handful of nautiluses to ever be born in an aquarium. It’s taken quite a while for the little creature to be born: the egg was first laid in November 2012 and has taken weeks to hatch. It wasn’t until last Wednesday that the process was finally completed!

According to Zooborns, the originator of this article, “the eggs were laid in the display tank and then removed and placed into an incubator tank where the temperature was maintained at 76 Farenheit. The eggs were glued onto a vertically positioned piece of plastic in order to keep them upright. Water changes using only “extra clean” natural sea water were performed weekly to keep the incubator tank clean.”

The photos below detail the process of the nautilus hatching. These were taken over a period of weeks. Good things take time, after all!

Nautiluses are ancient cephalopods (relatives of octopuses, squid and cuttlefish) that long pre-dated the dinosaurs and have remained relatively unchanged for 500 million years! They’re the sole living cephalopods whose bony body structure is externalized as a shell. The animal is able to withdraw completely into its shell and close the opening with a leathery hood formed from two specially folded tentacles. These creatures are only found in the Indo-Pacific at depths of no more than 703 m (implosion depth for nautilus shells is thought to be around 800 m).

Below is a video of a different baby nautilus born to Reef HQ Aquarium in Australia. Unfortunately, the little guy did not survive for more than a few days.

Be sure to check out Zooborns for more adorable baby zoo animals!