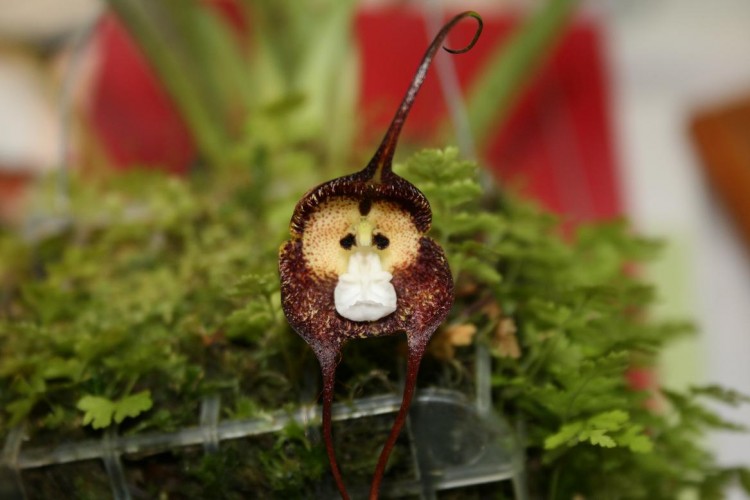 I know, I know, these aren’t really animals. However, these species of orchids look so much like different species that I just had to share them all with you. Prepare to be blown away by the most amazing orchids you’ve ever seen:

This species of orchid, aptly named the Monkey Face Orchid (Dracula simia), was created after Mother Nature decided to do a bit of monkeying around (hah!). These rare monkey orchids only grow in the cloud forests of southeastern Ecuador and Peru at elevations of 1,000-2,000 meters on the side of mountains. In the scientific name, “simia” refers to the monkey face and “Dracula” refers to the two long spurs that hang down, almost like fangs.

What makes this flower even cooler (as if it needed to get any more awesome) is that it smells just like a ripe orange when fully blossomed. Incredible!

This incredible orchid is called – can you guess? – the Bee Orchid (Ophrys apifera). It resembles a female bumblebee visiting a pink flower to attract the attention of male bees. Thinking another one of their kind is there, they try to mate with it. In the process they get covered in the orchid’s pollen and end up spreading it around as they fly and pollinating other flowers as they go. You can find these amazing orchids scattered about England, Ireland, and Wales.

This Pink Moth Orchid (Phalaenopsis sp.) is absolutely gorgeous and amazingly cool for the sole reason that it looks like it has a little bird’s head guarding the nectar on the flower. It’s so well-formed that it almost looks like a little baby bird fell into the flower and got stuck there. I’m not exactly sure why the orchid looks like this but thank God it does! What a cute little orchid.

This elegant orchid is called the White Egret Orchid (Habenaria radiata) because it looks just like a… white egret! The flower looks like the bird is spreading its fluffy white feathers, getting ready to take off. Look, how similar are these guys?

Similar to the Pink Moth Orchid is this Holy Ghost Orchid (Peristeria elata) which also has a little hidden creature inside it. In this case though, it’s not just the head of a bird but an entire bird! A dove, to be exact. What a peaceful looking flower, don’t you think?

So last but certainly not least is perhaps my favorite of all the orchids on the list – the Flying Duck Orchid (Caleana major). It’s a small orchid, about 50 cm tall, that grows in eastern and southern Australia. It’s the mots remarkable flower – it seriously looks just like a male duck in flight! Nature just amazes me.

Which was your favorite animal orchid?

Edit 7/7/13:  I’ve received quite a few emails (to say the least) about where you can purchase these orchids. I’ve found some seeds being sold online and will list them below for your viewing pleasure. Note: I have no affiliation with these companies and do not know how great the product will be. Just sayin’! 🙂

Unfortunately, no luck on the White Egret Orchid, Holy Ghost Orchid, or the Flying Duck Orchid 🙁 You’ll just have to enjoy looking at them on The Featured Creature 😉

Elephant Nose Fish: You Know I’m All About That Trunk (No Treble)